This book nearly defies categorization, and for many readers it will defy all possibility of enjoyment. Is it a mystery yarn set in a rural village? Is it a clue-filled puzzle that revolves around a complex array of alibis? Is it a work of social realism that provides a gimlet-eyed view of Depression-era class relations? Is it a horror tale that traffics in images of inhuman (or, perhaps, all too human) depravity? It’s all of these things, and yet it’s not quite any one of them. What stands out amid the many threads that Patrick weaves into this unholy tapestry is a striking pattern of violence, sadism, and misanthropy. Consider a few threads in particular: the practice of vivisection for medical research, multiple instances of outright cruelty to animals, a killer with a penchant for dragging victims (in at least one case, while they’re still alive) at the rear of a car, discussions of human congenital deficiency that echo then-still-popular eugenic theories, a rendition of rural society that seems borrowed from the bleakest naturalistic tract by Emile Zola or Theodore Dreiser, and depictions of sexual dysfunction that come straight out of a treatise by Krafft-Ebing.

In sum, this fifth published effort by the Patrick-Quentin-Stagge consortium may be the least cozy novel produced by an author of otherwise mainstream detective fiction in the first half of the 20th century. (According to Curt Evans, a redoubtable authority on this “author,” Grindle issued from the pen of Richard Wilson Webb, with an assist from Mary Louise Aswell.) The slick, urbane style that the author applied to all of “his” work is very much on display, and Patrick even includes a telling reference to Agatha Christie. But the setting and mood of the tale owe far more to the likes of H.P. Lovecraft than to the creator of St. Mary Mead.

The village of Grindle, located in an unspecified part of New England, exists both as a tiny world unto itself and as an embodiment of the grand tradition in which authors like Lovecraft—along with precursors like Nathanael Hawthorne—envision a lush New World venue as a site of battle against ancient forces of evil. The novel’s opening scene provides an ominous glimpse of the land and people of Grindle: “There were little knots of villagers at every corner; in the woods we could hear the barking of dogs and there was an occasional gleam from a flashlight. … [Later] I could still hear shouts ringing across the valley. There was a restless, hopeless quality about them which gave me the impression that our neighbors had gone out to look for something which they knew they would not find—something of which they completely despaired.” The writer of those lines is Dr. Douglas Swanson, a young medical researcher who narrates the tale. He and another doctor, Antonio Conti, share a house in Grindle, and they commute to their laboratory at Rhodes University, which lies about 20 miles away. Although Swanson and Conti serve as emissaries from the realm of scientific modernity, their use of dead animals for research purposes adds a morbid note that resonates through the novel both practically and thematically.

As it turns out, the villagers in the introductory scene were searching for Polly Baines, a girl from a poor farm family. She and her cat have disappeared, and the prospects for finding them alive look none too good. Not long afterward, the slain corpse of Polly’s father is discovered in a pond; he had been left there to drown, with his hands manacled in a pair of animal traps. Aside from the down-on-their-luck Baineses, the key figures in this drama represent the affluent (or at least shabby-genteel) stratum of local society. At the center of that society is Seymour Alstone, a mining magnate who exerts tyrannical control over the village in general and over his feckless son, Franklin, and his mild-mannered grandson, Gerald, in particular. Other figures include a medical student named Peter Foote; the Goschens, a family of hearty sporting types; Colonel Edgar Tailford-Jones and his adulterous wife, Roberta; and Valerie Middleton, a young woman whose father committed suicide back in 1929, after undergoing a financial setback for which old man Alstone was partly responsible. 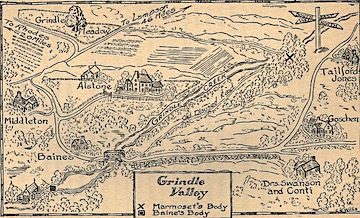 Around these characters, Patrick builds a dense plot that encompasses a nocturnal assignation on an abandoned road, a ghostly face that looms in a window and disrupts a dinner party, an act of arson that destroys a barn and almost immolates the horses inside it, bloodstains on the wooden planks of a covered bridge, a snowstorm that hides crucial evidence, and much else.

Somehow the whole thing works. Once the novel enters its final phase, a satisfying work of classic detection comes miraculously into view. For those not entirely put off by the carnival of madness and mayhem that unfolds in the first three-quarters of the tale, the last fourth of the book presents a bravura chamber piece in which confusion and chaos give way to enlightenment and order. While the clock ticks toward an hour of reckoning—Deputy Bracegirdle, the local lawman, plans to make a decisive arrest—Patrick engineers several feats of canny misdirection and several moments of startling revelation. (Until the very end, a sense of mystery hangs over a pair of fundamental quandaries: Who counts as a suspect, and who qualifies as a detective?) Then, in one fell swoop, the pall over Grindle lifts. The truth, when it arrives in full, has the cleansing power of a bright dawn that follows a grotesquely long night. Even in the grim vale that Grindle residents call home, scattered rays of reason and sanity and even love shine through.