“Less” is quite a bit “more” in this tidy, offbeat crime puzzle. It’s practically bereft of detectives (a few policemen do appear, albeit mainly in the form of incident reports that they submit) and wholly bereft of detection. In effect, readers must fill the crime-solving role directly, without mediation by a truth-seeking hero. MacDonald structures the tale as an inverted detective story that he has inverted yet again: It starts with an epilogue and ends with a prologue, and (roughly speaking) it depicts the unfolding of a complex criminal scheme in reverse chronological order. By dispensing with the apparatus of sleuthing and by focusing on the interplay among small group that includes a victim, a putative culprit, and a handful of the victim’s associates, MacDonald manages to pack a great deal of intrigue into a very slim volume. 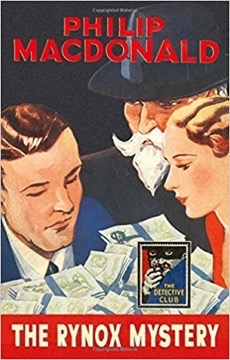 Among the central players in the drama are Francis Xavier Benedik, a partner in a London investment firm; his son, Anthony Xavier Benedik, who is also a partner; a third partner, Samuel Rickworth; and Rickworth’s daughter, Petronella (“Peter”), who is Anthony’s fiancée. Supplementing the cast are assorted clerks, secretaries, and servants who work either at Rynox House, where the investment firm keeps its offices, or at the Benedik home in Mayfair. (MacDonald, in deftly sketching the upstairs-downstairs dynamics of those locations, provides an appealing sidelight of the tale’s main events.) One other character flits menacingly about the world inhabited by the Benediks and the Rickworths. He is Boswell March, a surly fellow who sports an odd-shaped hat and who harbors an oddly fierce grudge against F.X. Benedik. One night, Boswell pays a visit to the latter man’s house; then, after a fusillade of gunfire, the lifeless body of Benedik is found lying across the sill of a window in his study. The killing isn’t quite an impossible crime, but its mannered staging and intricate mechanics bear the clear stamp of Golden Age ingenuity. (Detailed floor plans and elaborate timetables further add to the novel’s appeal.)

The plot of The Rynox Murder, though well-crafted on the whole, has weaknesses: One aspect of how the assailant pulled off the killing doesn’t stand up to scrutiny, and the key deception that underlies the crime will be fairly obvious to many readers. Other elements of the book, meanwhile, count as real strengths. True to its title, the novel centers much of its action on the business dealings of Rynox, a firm that has invested a large—perhaps too large—portion of its assets in a speculative venture that involves the then-new industry of synthetic rubber. MacDonald handles this otherwise uncompelling material with wit and flair, turning dry exchanges about bank loans and insurance policies into engaging narrative fodder. He also graces scene after scene with touches of sly, character-driven humor. Given its slender length and its compact plot, this novel (or is it a novella?) seems like a mere trifle. But it’s richly adorned trifle at that.