In his début work, Mosley embraces many of the stylistic trappings and plot devices that define the Southern California private-eye adventure. And he adds a decisive twist: His hero, Easy Rawlins, is black. The case starts when a white man named DeWitt Albright—a slippery fellow whose motives are dubious but whose cash is quite real—hires Rawlins to locate a woman named Daphne Monet. She’s a white woman, Albright explains, but she “has a predilection for the company of Negroes.” 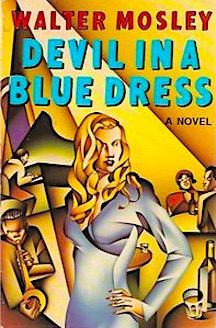 Little by little, an apparently straightforward skip-trace job draws Rawlins into a vast whirlpool of corruption, and he will need to work fast and smart in order to escape the ordeal with his life, and with a remnant of his dignity. Broadly speaking, then, Rawlins confronts practical and existential challenges that would be familiar to any number of fictional gumshoes. Yet he isn’t just another lone knight on the model of Philip Marlowe or Lew Archer. Along with his dark skin, Rawlins bears a dark outlook that reflects his position in American society. He has meaner streets to ply than his white counterparts do, and the dangerous women who cross his path are all the more dangerous because they (most of them, at any rate) are on the other side of the color line from him. Rawlins had known violence and tasted freedom during the Second World War—the action takes place in 1948—and he has come home to find that in postwar Los Angeles violence is all too common and freedom is all too rare. By offering a stark glimpse into the mind and spirit of Rawlins as he carves out a life in that time and that place, Mosley elevates the tale above most works that follow in the vein of Raymond Chandler and Ross Macdonald

The plot, however, exhibits the kinds of defects that often mar the hard-boiled form: It’s ridiculously complex, and it relies more on frenetic action than on thoughtful detection. As if to obscure the lack of clues that he provides, Mosley serves up a half-dozen corpses; in effect, he substitutes a process of elimination for one of investigation. As a result, in a reversal of what the best detective novels offer, the buildup proves more compelling than the payoff.

Posted by Mike on October 4, 2018 in American, Hard-Boiled, Novel