This second novel to feature Charlie Chan, the famously sententious detective from the Honolulu Police Department, appears on the surface to be a work of straight middlebrow entertainment. But within its pages, there’s a wealth of material for a certain kind of highbrow literary theorist to muse upon. It’s full of elements that beg (or politely insist, as Chan might do) to be read on more than one level. 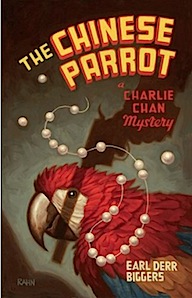 Start with the title, which refers in a literal sense to a bird named Tony, a bird that someone kills because it had been reciting a line of presumably incriminating speech. Tony could talk, but his “talk” is merely imitative. In a figurative sense, meanwhile, the title refers ironically to Chan. How, after all, do many white people view Chan if not as a Chinese parrot—as an inferior Asiatic who puts on a lively show by straining to copy his betters? Yet Biggers, although he pokes fun at Chan’s less-than-perfect use of English grammar, consistently gives the Chinese detective lines of dialogue that reflect a profound and original intelligence. To complicate the matter further, Biggers requires his protagonist to spend much of the novel in disguise as an ignorant, ill-spoken cook named Ah Kim. Chan comically resents having to commit a multitude of solecisms (he must suppress his ability to pronounce the letter L, for instance), but he inhabits the role plausibly enough. In these and other ways, The Chinese Parrot amounts to a tidy pattern of signs and substitutions, a neat little system of mimicry and imposture.

The storyline of the novel is an overtly simple affair. At a high-end San Francisco jewelry store, the finance magnate P.J. Madden buys a lustrous (and illustrious) set of pearls. Chan, a friend of the family that is selling the pearls, agrees to help deliver them to Madden. Along with Bob Eden, a jeweler in training who serves here as a juvenile romantic lead, Chan ventures to a remote area in Southern California where Madden keeps a ranch home. Within a day of arriving at Madden’s compound, Chan and Eden meet with a series of peculiar or disturbing events: Tony succumbs to rat poison, there is a gun that has gone missing, and odd characters keep sprouting up on the otherwise desolate scene. A Chinese cook turns up dead (Chan, donning the identity of Ah Kim, steps in to replace him), and several clues point to the possibility that another man has been slain as well. But who might that victim be? And who counts as a suspect in this case of a murder that might or might not have happened? In pursuing one investigative lead after another, Chan proves himself to be one clever bird. He then reveals a solution that had been hiding in more or less plain sight. Alas, the plot hinges on a matter of identity that has a big structural flaw in it—an underlying criminal scheme that requires several major characters, including Chan, to be fooled in a way that’s nearly impossible to credit.

That’s too bad. Everything else in this tale—everything that leads up to that problematic ending—exemplifies the best of what popular storytelling can offer. Along with his playful tweaking of received ideas about language, identity, and ethnicity, Biggers delivers an slew of narrative treats: fresh and genial humor, a romantic subplot that carries no trace of smarm or unearned sentimentality, sharply honed descriptions of the California terrain in both its urban and its desert forms. He also captures the core appeal of the sleuthing trade. At one point, after interviewing a witness, Eden asks Chan, “Well, what did we get out of that? Not much, if you ask me.” And Chan replies, “Trifles, mostly. But trifles sometimes blossom big. Detective business consist of one insignificant detail placed beside other of the same. Then with sudden dazzle, light begins to dawn.”