“I could see another of those scenes brewing, as usual in this topsy-turvy house,” writes Jeff Marle, a young author who serves as Carr’s not-even-thinly-disguised alter ego. That line comes late in the grim affair that Marle narrates here, and it neatly conveys the defining mood of the novel. The house in question, owned by a crusty patriarch named Judge Quayle, lies forlornly amid what Marle describes as “the mountains of western Pennsylvania, blue as Vesuvius.” Carr (in Marle’s voice) paints this dreary landscape in darting, perfectly applied strokes. From the start, when Marle pays a call on the judge, the reader can practically feel and taste the soot-laden wind that seeps through the ancient walls of the Quayle homestead. Carr grew up in this part of the world, and that experience partly accounts for his flair in writing about it. But another source of inspiration may be the evocative rendition of Pennsylvania coal country that Arthur Conan Doyle delivers in The Valley of Fear, the last Sherlock Holmes novel. Given Carr’s high admiration for Doyle, it wouldn’t be surprising if that tale—in particular, the slice of dark Americana that takes up its latter half—influenced Carr in this way. 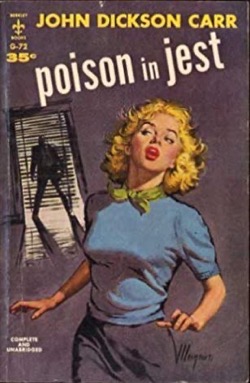 Apart from a prologue and an epilogue, all of the action in Poison in Jest occurs at the Quayle house or on its grounds. Marle is visiting the Quayles after a decade of traveling in Europe, and he soon finds that he has ventured into a classic viper’s nest, a household in which several members could become—and do become—the object of a killer’s wrath. Denizens of the house include Judge Quayle, his bedridden wife, and four of their five adult children. The fifth offspring, a hot-tempered fellow named Tom, had fled the house a few years previously. Also resident in the home is Walter Twills, the husband of Clarissa (née Quayle) and a man of independent means. Those means, in fact, are keeping the Quayle ménage financially afloat, and a covetous attitude toward the Twills fortune appears to drive a series of poisonings that take place on the night of Marle’s visit. Not all of these homicidal efforts hit their target, but one of them does, and more violence happens in its wake. Moment by moment, the novel comes to resemble the house: It’s a closed, tension-wrought space in which an aura of dread steadily washes over a backdrop of homey comfort.

Within Carr’s body of work, this entry occupies a transitional spot. It sits chronologically—and, to some degree, tonally—between the sequence of novels about Henri Bencolin that launched his career and the pair of long series about Dr. Gideon Fell and Sir Henry Merrivale that he would inaugurate over the next two years. The horror-tinged ambience that looms over Bencolin and his world is also present at the Quayle manse, albeit in a less Grand Guignol form. (The shift to Carr’s native ground seems to elicit a more naturalistic style from Marle, who narrated the Bencolin adventures as well.) The star sleuth in this one-off tale, meanwhile, is a dashing but absent-minded Brit named Patrick Rossiter. He arrives late to the proceedings and, perhaps for that reason, makes a relatively shallow impression. Rossiter foreshadows both the down-to-earth bonhomie of Fell and the crazy-like-a-fox antics of Merrivale, yet the elements of his persona don’t come together nearly as smoothly as the pieces of the puzzle that he solves. He amounts to an amusing but failed experiment, a literary road that Carr shrewdly did not take.

The plot also marks a hiatus between one phase of Carr’s career and the next. More so than the Bencolin tales, or than most of the Fell and Merrivale tales, this book unfolds as a straight whodunit: Its chief mysteries revolve around locked hearts, not locked rooms—around impossible-to-contain hatreds, not impossible-to-commit deeds. In a subplot that concerns a “phantom” hand that haunts Judge Quayle, Carr offers a bit of medium-grade jiggery-pokery (as he would call it on other occasions). Otherwise, though, the trickery that he employs is the kind of thing that Agatha Christie would have proudly used. Viewed in that context, the novel counts as a sound piece of work. Some of the clueing hangs by rather tenuous threads. But it all does hang together, and the main feats of misdirection are well and fairly done.