Just a few flaws mar this generally appealing late work in the fabled series about mystery writer and occasional amateur sleuth Ellery Queen and his father, Inspector Richard Queen of the NYPD homicide squad. Because the plot has a scale not much larger than that of a novella, the book—though relatively short (it numbers 185 pages in one paperback edition)—includes a fair amount of padding. There are two murder trial sequences, and they both drag beyond the point of their narrative purpose. Some of the surplus text, moreover, takes the form of schmaltzy patter about American life in the mid-1960s (Did you know that television is a font on silliness?), and about New York City life in particular. The sketches of contemporary Gotham read like a bid to recapture the magic that Queen achieved with his bravura rendering of the city in Cat of Many Tails. But they fall shy of matching that high standard.

Also somewhat flawed is the novel’s rigidly stylized setup. As the title suggests, The Fourth Side of the Triangle displays all of the artifice (and artificiality) of a geometry problem. The case revolves almost entirely around four characters and one Park Avenue apartment building. Ashton McKell, a titan of industry, and his wife, Lutetia, both hail from old Knickerbocker families and embody old New York money. Their lone heir, a son named Dane, has plenty of his own money and uses it to fund a middling career as a novelist. The fourth participant in what turns out to be a dark family romance is Sheila Grey, a fashion designer who lives upstairs from Ashton and Lutetia. 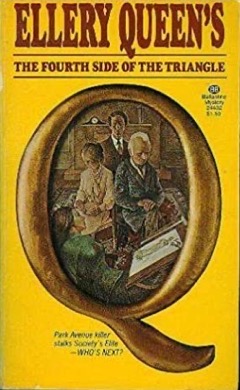 Grey, a thoroughly modern woman with an air of mystery about her, beguiles both McKell men and puts herself in competition with the McKell matriarch. So, when this “other woman” succumbs to a gunshot in her penthouse apartment, the obvious suspects in her murder are a quick elevator ride away. The story relies on strong passions—or at least the idea of strong passions—to yield potential motives for the killing. Yet its main characters (and its minor ones, too) exist only in two dimensions; they are, in essence, simple shapes that happen to intersect on a plane.

What’s appealing about the novel, though, are the clever variations that Queen makes to some classic Queenian maneuvers. (“Queen” here refers to an arrangement in which Avram Davidson ghost-wrote the book from an outline provided by Frederic Dannay.) First, the artificiality of the plot has an upside as well as a downside. By deploying a narrow cast of characters and by keeping a tight focus on what happens in or around Grey’s apartment on the night of the murder, Queen creates a chamber piece that unfolds with an engaging point-counterpoint rhythm. That piece offers only a faint echo of the baroque patterns of intrigue that characterize early masterpieces like The Greek Coffin Mystery and The Tragedy of Y. Still, it works well as a streamlined update of the formal deductive problem that had long been a Queen trademark.

Second, the author delivers a twist on the dying-message trope that recurs throughout the Queen corpus. Typically, such messages involve a quick, spasmodic gesture by a victim during his or her last seconds of life. In this instance, Grey takes several minutes to craft a letter to the police (“To be opened only in the event I die of unnatural causes,” she writes), and does so before the killer strikes. The letter becomes a critical piece of the plot machinery, but its ultimate import hinges less on what it says than on how certain parties respond to it.

And third, like several of its precursors, the novel features a set of multiple solutions that nest into each other in Russian-doll fashion. Agents of the law purport to solve the case by targeting each “side” of the McKell “triangle,” and their efforts go awry each time. Eventually, Ellery presents a solution that proves to be false as well, and the revelation of his error sends him into a bout of crushing self-recrimination. “Ellery had been through many ratiocinative crises in his life, but it was doubtful if any hit him as hard as” this one, Queen writes. Throughout the affair, Ellery performs his usual share of masterful sleuthing work. But he also shows that even genius amateurs are fallible, and his stumbles give Inspector Queen—that consummate professional—a chance to shine.