For her first novel that doesn’t feature the series detective Basil Willing, McCloy relies heavily on tropes used in various movie thrillers of the prewar and wartime eras. It recalls, in particular, the ur-plot of several Alfred Hitchcock films: An innocent hero, whom fateful circumstances have cast in the role of a guilty fugitive, scurries across urban and pastoral landscapes as unfamiliar threats lurk around every apparently familiar corner. Do Not Disturb also calls to mind the work of Cornell Woolrich, along with the cycle of noir-inflected novels and films that followed the angst-filled trail that Woolrich blazed. These works conjure up a world marked by freakish coincidences (or, rather, by events that seem to be coincidental). 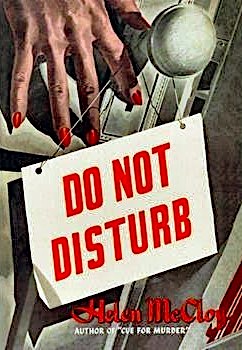 They reflect a vision of modern life in which a faceless crowd can suddenly become a swarm of people who are all “out to get you”—“you,” in this case, being a beleaguered protagonist who stands in for the everyman (or every-woman) reader.

Narrated in the cultivated but slightly neurotic voice of its heroine, a divorcée named Edith Talbot, this standalone tale begins with Talbot’s desperate nighttime search for lodging in a Manhattan where the U.S. Army has commandeered many of the local hotels for the quartering of troops. That opening sequence sets the tone for a story in which the war-skewed city becomes a strange and menacing place—a place where nothing is predictable and no one is worthy of trust. At the Hotel Majestic, where she eventually lands a room, Talbot encounters circumstances that most certainly do disturb her: She hears a man crying in the room next to hers. She meets a man in that room who identifies himself as a member of New York’s Finest. She comes back to her own room one night and stumbles upon a corpse. This sequence of inhospitable occurrences leads her to flee the hotel. But where can she go? She dare not go to the police, because the cop whom she met next-door appeared to be giving the “third degree” to the very man who later turned up dead in her room. Her frantic quest for both truth and safety propels her to rural Pennsylvania and then back to the urban jungle and finally to a (literal) cliffhanger scene in which she confronts the main villain, a fascist sympathizer whose motive for various crimes gives this thriller a contemporary political twist.

McCloy brings her usual verve to this topsy-turvy adventure, but ultimately it isn’t the kind of story that suits her talents or her sensibility. Like Willing, she possesses a confidently rational mind; she lacks the paranoid spirit that enables a writer like Woolrich to create a febrile, dreamlike atmosphere in which improbable events take on an air of inevitability. A later novel by McCloy that centers on a fearful, besieged heroine—Through a Glass, Darkly (1950)—unfolds more convincingly, partly because of Willing’s calm presence and partly because it doesn’t rely on first-person narration. McCloy has clearly put much of herself in Talbot. Both women are well bred and well educated, and each of them occupies a social position in the upper reaches of the American class system. But in reading Talbot’s account of her ordeal, one can’t shake the sense that her creator would never deign to get caught in such a predicament.