Genre-wise, this early book in the Inspector Napoleon Bonaparte series (and the first “Bony” title to appear in the United States) reads more like a Western than it does like a detective novel. It takes place in Burracoppin, a small railroad town that serves a wheat-farming community in Western Australia. Automobiles, along with a motorcycle, figure prominently in the events that unfold in Burracoppin, but the rhythms of the town are those of a pre-20th-century civilization. There’s a planting season, followed by a harvest season, and to mark the turn of those seasons, there are big shindigs that bring together folks from all walks of town life. Upfield uses a pair of such events as set pieces; they allow him both to convey vital plot points and to conjure images of a freshly settled frontier. Bony plays the classic Western-story role of the stranger who arrives in town to set things right. The rupture that he must heal concerns the disappearance of a farmer named George Loftus. Did Loftus abscond of his own will, or did someone make him vanish? To investigate the matter, Bony goes undercover as a laborer assigned to help maintain the Rabbit-Proof Fence, a vast structure built to protect the Australian wheat crop from pesky critters. That job gives him a chance to trace Loftus’s last traceable movements, and he resolves the quandary of what happened to the farmer in fairly short order: It is (as the U.S. title reveals) a simple case of murder. 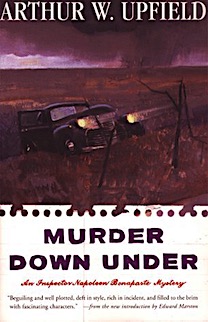 The matter of who killed Loftus isn’t much of a riddle, either. Along with scouting the hard country ground for clues, Bony focuses on getting to know the local residents—the stern boarding-house keeper Mrs. Poole and her cheerfully henpecked husband; the farmer Mr. Jelly and his daughters, Lisa and Sunflower, who befriend Bony; Eric Hurley, a young chap who has an easy smile and easy way with a motorcycle; and several others. Yet hardly any of them qualify as suspects. Bony, acting less as a sleuth than as a tracker, zeroes in on his quarry at the midpoint of this tale. Then, drawing on his fabled capacity for patience, he works to gather evidence that will prove what he already intuitively knows. (Upfield’s depiction of the detective is consistently affectionate but off-puttingly racial in its framing: Bony, the author repeatedly suggests, is a half-caste who combines the putative rationality of a white man with the more earth-bound talents of a black aborigine. He is able, supposedly as a matter of genetic endowment, to read the Australian bush as if it were the Book of Life.)

As in the archetypal Western, the action in Murder Down Under relies on a moral logic that distinguishes unforgivingly between good deeds and bad deeds—and between good people and bad people. The quest to banish evil from the land, rather than the need to dispel a mystery, is what drives the engine of this well-told tale. The book’s original title, “Mr. Jelly’s Business,” nods toward its only genuine puzzle. Why does Mr. Jelly disappear without warning for days at a time, only to return without explanation? Why, when he comes back, does he always have money in this pocket and strong drink on his breath? The secret of the old man’s peculiar excursions plainly relates in some way to the Loftus affair, but Upfield waits until the novel’s last page to reveal how the two stories dovetail.