This last of Hammett’s five novels partakes of an old myth—that of the retired hero forced back into action by the flowering of an evil that only he can stamp out. The hero is Nick Charles, a onetime private detective who has escaped the fleshpots of New York and now manages his wife’s fortune in the Golden West. The evil involves the disappearance of a former client of his, a wealthy inventor named Clyde Wynant, and the murder of Julia Wolf, Wynant’s assistant-cum-mistress. 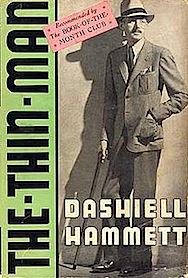 Charles, who’s back in New York on a short trip with his wife, Nora, finds time amid a regimen of cocktails and wisecracks to interview suspects and to spot the killer among them. He is a reluctant hero; Nora, who craves adventure, has to goad him into taking on the case. But he demonstrates that he hasn’t gone soft, after all, and he puts the world aright.

Or does he? Hammett tries to marry two genres, each of which marks a departure from his earlier work: the traditional whodunit, complete with clues and suspects, and the sophisticated comedy of manners. And in that attempt, he doesn’t quite succeed. His outlook was ultimately too grim for either genre—too nihilistic, too full of moral despair. Unlike his prose, his view of what motivates people wasn’t in any way clean. (The classic movie version of the novel, by contrast, succeeds winningly. In the translation of the story to the silver screen, the plot becomes at once leaner and more clever, and each character takes on the safe outlines of a satiric type.) Beneath its glossy finish, The Thin Man anticipates the seedy fictive world of Raymond Chandler: It contains intimations of incest, and it hums with contempt for a moneyed class that the author depicts as being indistinguishable from a class of criminals. These are evils that a hero might subdue but that he is powerless to dispel.