A mutilated body, barely recognizable as that of a boy, is found atop a bridge tower in the Manhattan of 1896. Further obscuring the sexual identity of the victim are the dress and face-paint that had, in life, rendered him a cartoonish facsimile of a girl. The poor soul had been among the countless immigrant children who are compelled by a Darwinian struggle for survival to sell their flesh, and to sell it to a clientele with specialized tastes in how such tender merchandise is packaged. 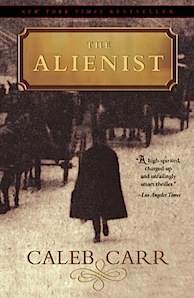 It’s not the sort of crime that would typically spur much official interest in locating the perpetrator. But the killing follows a series of earlier, similar atrocities, and New York City police commissioner Theodore Roosevelt worries over the threat posed to the social order by a fiend who targets the immigrant poor. Fearful of mob violence, Roosevelt creates an unofficial committee to investigate the murders and places at its head Dr. Laszlo Kreizler, the tale’s eponymous hero. (“Alienist” was a then-common term for what we now call a psychiatrist.) In this man, every major trend in the burgeoning field of psychology seems to converge, from William James’s work on the early formation of habit to the theories of Freud and Breuer concerning the effects of childhood trauma—and Kreizler brings all of that insight to bear on the search for the killer’s motive and whereabouts. He also brings to the case a tumultuous background of his own that figures decisively in the manhunt. Carr overloads the novel with historical digressions, moral and psychological theorizing that occasionally flirts with anachronism, and bouts of old-fashioned high adventure. At its weakest, his writing suggests a combination of Jonathan Kellerman (whose own shrink hero, Alex Delaware, flourished in fiction a century later) and the Hardy Boys. Yet at his best, which is on display frequently enough, Carr maintains a firm hold on a smart, sprawling narrative.