Nowhere in the mystery writer’s manual does it say that the protagonist of a gothic-suspense yarn must be a woman, or must be an amateur. Nowhere does it say that an author can’t take a tough-guy private eye—the sort of hero who feels most at home in a snappy tale about gangsters and gun molls—and install him in a big old country house where secrets rattle around like rats behind the wainscoting. That, in fact, is what Lawrence does here, in the first installment of what became a three-book series that centers on Manhattan-based P.I. Mark East.

In the dead of winter, East ventures to the remote outpost of Crestwood (presumably located somewhere in Upstate New York), where the wealthy Morey family has rented the old Davenport place. It’s a rather small household, consisting of hearty Jim Morey and his troubled wife, Laura, who spends much of her time alone; their two daughters, 10-year-old Anne and 2-year-old Ivy; and Joseph Stoneman, a grizzled, cranky archeologist who claims Jim as a patron. 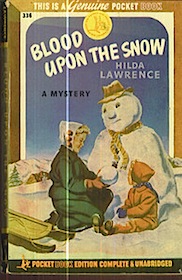 Stoneman, as it turns out, is the client who has lured East away from his urban habitat. Animated by vague premonitions of danger, the archeologist hires the sleuth to act as his bodyguard (while posing as his secretary). Before long, though, East has reason to believe that it’s not Stoneman’s life that needs guarding. Violence, when it comes, is literally domestic: It strikes a cook and housekeeper named Mrs. Lacey, and then it strikes a maid named Florrie Simmons. No one can say why anybody would want to kill those salt-of-the-earth local women, and that fact only intensifies the aura of fear that now hangs over the Morey ménage.

Lawrence knows how to sketch a character into being and how to etch a scene with varieties of shading that are alternately light and dark. She peoples the world around Crestwood with affectionately drawn comic supporting players, including a pair of spinsters, Miss Beulah Pond and Miss Betsy Petty, who befriend East and emerge as his cohorts in crime-solving. The mood that she creates, meanwhile, shifts quickly and credibly from frothy amusement to icy dread. What she doesn’t know, it seems, is how to make the gears of her tale—not just the overt narrative, but also the covert story of what’s really taking place over at the Davenport house—mesh together convincingly. Of course you expect a gothic novel to be, well, gothic. You expect it to test your willingness to suspend disbelief. But Lawrence serves up an epically convoluted plot that’s hard to understand and, therefore, hard to believe. The story-behind-the-story that East reveals in the denouement has the potential to pack a real punch, and it certainly comes as a surprise. Yet it isn’t a surprise that Lawrence has prepared readers for, either through sound clueing or through careful psychological foreshadowing.