“Steady!” It’s a phrase—an authorial tic—that recurs throughout Carr’s fiction, and it pops up a couple of times in this compact novel that features the anything-but-compact Dr. Gideon Fell. Carr typically inserts that potent little exclamation at a moment when a character needs to gather his wits or his nerves in the face of some deeply alarming turn of events. Likewise, it’s an admonition that readers should heed as they try to follow the gobsmacking sequence of events that unfolds here. He Who Whispers is a miracle-problem tale that hurtles forward at a miraculous pace. Stunningly ingenious and adroitly engineered, it represents a peak moment in Carr’s career as a master puzzle setter. 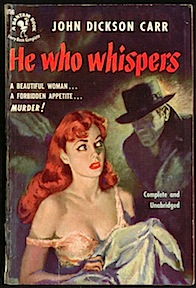 Two interconnected problems, separated in time by the six years that mark the Second World War, drive the novel’s rapid-fire action and its breathtaking display of literary detection. First comes the crime at Chartres. In the peacetime summer of 1939, an English industrialist who lives in that French town walks to the top of an ancient tower and falls victim to an inexplicable act of violence: He’s found with a fatal wound from a sword-cane in his back, in circumstances that seem to rule out the possibility that anyone could have come near him at the time of the assault. Then, soon after the end of the war in Europe, comes the crime at New Forest. At a country house in that idyllic region, shots ring out in the night. Miles Hammond, the owner of the house (and the leading man in this affair), rushes upstairs and finds the prostrate form of his sister, Marion; there’s a gun in her hand, and she’s nearly dead from shock. Who, or what, could have put her into that state? And who, or what, could have spurred her to fire those shots?

Linking those incidents are a strange meeting in a Soho restaurant, hosted by a group called the Murder Club, and a young woman named Fay Seton, who carries with her an aura of tragedy—and the vague intimation that she might be a vampire, of all things. Hammond attends the gathering of the Murder Club, and there he learns about the Seton woman, and about her involvement in the events at Chartres. That knowledge, though, doesn’t stop him from bringing her to his New Forest home to serve as a kind of secretary. (The series of coincidences that lead her from one crime scene to the other is the one seriously dubious element in Carr’s generally strong plotting.) The Murder Club scenes make for a great set piece, combining an otherworldly mood of pure melodrama with a gritty sketch of life in a war-weary metropolis. The Seton character and Hammond’s romantic fascination with her, meanwhile, push this traditional mystery 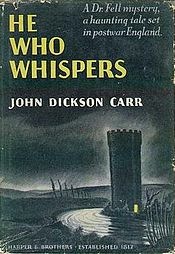 tale in a notably non-traditional direction.

[ADDENDUM: Last week, in comments that followed my less-than-enthusastic post about a Robert B. Parker novel, I noted that I don’t like writing negative reviews. This week, I get to correct the balance. I loved this novel by Carr, and I greatly enjoyed writing about it. It’s one of several Dr. Fell titles that I never got around to reading during my personal golden age of reading detective fiction, which occurred back when I was a teenager. Reading it now in my middle years (I sped through it a month or two ago), I felt the same thrill—the same sense of entrancement, the same rush of wanting (and yet not wanting) to reach the end of a book—that I felt when I first came under Carr‘s spell. My taste in detective fiction has broadened as I’ve grown older; I no longer expect every book by every writer to bedazzle and bamboozle me in that way that, say, a novel by Carr can do. But that doesn’t mean that I’ve outgrown my enthusiasm for what Carr called “The Grandest Game in the World.”]