This second published adventure of the gentleman sleuth Nigel Strangeways is a tart, clever Golden Age treat. It’s also one of those tales of detection in which the main source of mystery isn’t “Who done it?,” but rather “Who was he?” Fergus O’Brien, a flying ace during the Great War who became a flying hero during the aviation-mad postwar period, is a larger-than-life figure whose murder generates a larger-than-death quandary. 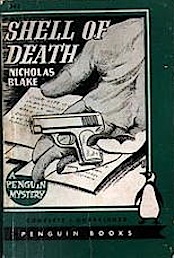 The homicidal deed occurs on Boxing Day, during a holiday gathering that O’Brien had been hosting at an estate in Somerset. Despite the standard house-party setup, the number of suspects on hand is fairly small. Strangeways, moreover, eliminates a couple of those suspects from consideration before the murder investigation has hardly begun. (In one case, he effectively exonerates a house-party guest by falling in love with her.) Which goes to show that Blake has only a marginal interest in playing the whodunit game. He does not, to be sure, neglect the pleasures of detection: In these pages, Strangeways and the police devote plenty of attention and plenty of shrewd thinking to the victim’s missing will, to a lone set of footprints in the snow, and to sundry other clues. Nor does Blake stint on delivering a genuine puzzle plot. (Puzzle-wise, in fact, the plot is a real humdinger, with a conclusion that cleverly inverts much of the storyline that precedes it.) What occupies the narrative center of this novel, however, is the mystery of O’Brien himself. Some event from his murky past, or some element of his murky character, incited an urge to kill within some member of his house party. What was it, exactly?

Behind the Blake pen name, there was a poet named Cecil Day-Lewis. This effort by Day-Lewis to bring poetry—a sense of romantic vision—into the prosaic business of crime doesn’t always work at the level of execution. He waits too long, for example, before providing a full, rounded sense of O’Brien’s heroic back-story. Yet the novel succeeds in conveying a message that transcends all such particulars: The death of any great man is a mere shell; what lies inside is the deeper conundrum of how he came to meet that fate.