Charles “Chick” Graham is on the run from the police, who believe that he’s a thief and a murderer named Albert Rand. He’s also on the run from a crew of grifters who have set him up to take the rap for Rand’s crimes. Amid this predicament, he pauses to reflect on the vagaries of personal identity in an age of mass urban civilization. How easily, Graham notes, this Rand fellow has been able to swap one persona for another:

It was impossible, on the face of things, for Rand to step into my place. But he’d done it. … [T]here is more to identification than the shape of a man’s ears and the testimony of people who know him. Or is there? For the average man, what more is there? Rand could write my name as well as I could. What more was there? Fingerprints? He’d taken care of that. Aside from that, a man is who he is because he has established a place in society. He has a wife and friends. There are clerks in stores. There are neighbors. He just fits in his groove. And Rand was in my groove.

It all starts when Graham gets off a commuter train one evening in Redwood City, California, and discovers that his wife isn’t at the station to pick him up. He makes his way home, walks inside, and encounters a guy who claims to be Chick Graham. 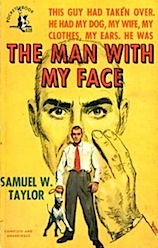 The guy looks just like him, all the way up to a pair of big ears that match his own ears exactly. His wife and a couple of friends are in the house, too, and they’re playing cards with this guy. Worse, they all treat him (the real Graham, the one who narrates these events) as if he were an impostor, and so does the local police officer whom they call in the handle the situation. Graham finesses his way out of an arrest at that point, but soon it becomes clear that he’s a wanted man: An elaborate conspiracy has cast him in the role of Rand, who that morning absconded with $2 million in bank bonds and who’s now the target of a statewide manhunt. What follows is a brisk tale of pursuit and escape, with episodes of detection marbled into the plot for good measure. Dodging and weaving his way around the San Francisco Peninsula and across the City as well, Graham must elude capture even as he tries to figure out how Rand and others have worked their incredible frame-up job—and how he, in turn, can work himself out of it.

“Incredible” is the right word to describe the whole affair. It stretches the bounds of credibility to posit that a guy could steal another man’s identity right under his nose—even if that nose does bear an uncanny resemblance to the nose on the other guy’s face. A scrim of contemporary realistic detail overlays this tale, but a strong element of fantasy and fable lurks within its core. Documentary in style but dream-like in spirit, the saga of Chick Graham calls to mind various works that evoke a similar mood of existential unease: the stories of Edgar Allan Poe, especially “William Wilson,” with its use of the doppelgänger motif; Phantom Lady, along with other novels of claustrophobic doom by Cornell Woolrich; Dark Passage, a novel by David Goodis that inspired a Humphrey Bogart movie of the same name (that story, too, concerns a man on the run in San Francisco); The Wrong Man, an Alfred Hitchcock film that pivots on a case of mistaken identity; and countless other entries in the literary and cinematic canon of mid-century noir. With works of this type, we readily lower our threshold for suspending disbelief. Each of us, when all is said and done, wonders, “Who am I?” And, in the hope of gleaning even a partial answer to that eternal question, we’ll entertain the most improbable of narrative premises.

Like many other suspense yarns from the 1940s, The Man With My Face weaves together several winning qualities. It’s admirably brief, clocking in at fewer than 200 pages in the 1950 Pocket Books edition (pictured above).

It’s clever, with smoothly worked-out twists and turns that make the identity-switch scheme and the unraveling of that scheme seem downright plausible. Finally, its author has something to say about “the way that we live now,” and he conveys that serious message with a reasonably light touch. Graham’s adventure ends happily enough, but his hard-won struggle to assert his identity and to save his skin leaves a lingering note of uncertainty in its wake: Once he has witnessed another man appear to slip into that skin, Graham can’t shake the thought of how thin the membrane is between one self and another. True, he no longer needs to keep looking over his shoulder. But he’ll never again be able to look in a mirror in the same insouciant way as he once did.

[ADDENDUM: For me, a fairly recent transplant to the Bay Area (I live just down the road apiece from Redwood City), one of the more beguiling charms of this book is its setting. A sharply evoked location adds a welcome ingredient to any mystery, I think, and that’s all the more true of a novel like this one, which centers on its hero’s ability to navigate a particular terrain that is full of very particular dangers. When Chick Graham rushes past Sequoia High School on one of his routes of escape, for example, the specificity of that detail makes this otherwise incredible tale almost believable. So I was disappointed to learn that the 1951 movie version of The Man With My Face takes place not in a workaday California town, but in exotic Puerto Rico. The makers of this film adaptation—as I discovered when I watched it last year—altered a few plot points as well. Viewed on its own terms, it’s a spicy middle-grade noir. But, having just read the book, I thought that it could have been better.]