Masur lacks a keen talent for plotting, but he does plenty of it. From a classic opening scene, in which a luscious and meagerly clad blonde surprises lawyer Scott Jordan in his New York apartment, to a final showdown between Jordan and a similarly provocative culprit, the author tosses his hero into a bewildering series of terse, tense encounters. 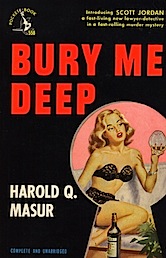 The blonde turns up dead after Jordan sends her away in a taxi, whereupon he starts to tangle with various parties implicated in her death: smarmy fellow attorneys, suspicious cops, a jealous would-be lover of the blonde, a stage-struck rich dame and her gigolo vocal coach, a dipsomaniacal client, and a dope fiend with a gun (and with a vendatta against Jordan), among others. Tying these characters to the murder are a divorce case, a car crash, a poisoned bottle of brandy, a lilac-colored glove, and much, much else.

The private-eye tale, at its best, hovers artfully between gritty realism in a “Naked City” vein and improbable fantasy in a “Baghdad on the Subway” vein. It sketches a familiar-looking urban jungle populated by guys wearing cheap suits and gals wearing cheap perfume, and it sends those people on a merry, madcap chase. Masur tries hard to achieve that potent combination but falters on both sides of the equation. His hardboiled details have a glossy, put-on look to them, and his overly dense yarn unwinds in ways that appear random rather than magical. In Jordan, Masur has created a likable sleuth, and his prose sparkles throughout. His story, however, merely glitters.

[ADDENDUM: Maybe I was too tough on this book. Several years have gone by since I read it (and since I originally wrote this review), and today I might take a kinder view of it. Many other folks, to judge from mentions of the book in the detective-fiction blogosphere, seem to like it well enough. The novel is indeed fairly derivative, and its plotting is too helter-skelter for my taste, but I’ve developed a growing fondness for the mid-century hardboiled genre from which it derives, and I’ve learned to accept that a revved-up plot counts as a feature—rather than a bug—in that tradition.]